This is the second in a series of short blogs from the CIPD Midlands Area Partnership event. 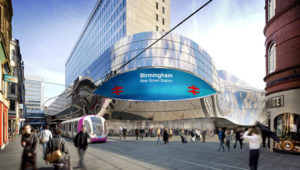 A keynote is always a difficult gig. Plenty of expectations – particularly if you’re the Chief Executive of the CIPD, Peter Cheese. Luckily for him Tim Jones from Network Rail kicked us off with an interesting talk about the overhaul of Birmingham New Street station, the “Birmingham Gateway” project – the largest regeneration project in Europe at £750 million. To give you a people context that’s a customer base of 220,000 using a station originally designed for 40,000 so a long overdue project.

From the very start Tim was clear that it wasn’t just what you did but how you did it. He spoke eloquently about social responsibility and addressing local unemployment. He was open about the difficulty of creating and employing such a diverse workforce. Originally it was predicted to be 767 jobs created – it ended up being in excess of 18,000. Key to this was a partnership approach and speaking to agencies and contractors about how Network Rail would train their staff. This was backed up by really clear tender documents to ensure success – you’d expect that. However there was also a “Charter for Jobs and Skills” which was shared everywhere. This was fundamental in the partnership with South Birmingham College and led to a “Jobs and Skills Pledge” several years in to re-energise  this commitment.

There was a brief excursion in to the reporting elements – underlining the importance of clear deliverables but it was interesting to note that there was also a “celebration” element in the scorecard we were showed. Tim was really clear about wanting to show colleagues how well the project was going, not just the obstacles and barriers. Also it was pleasing to note that email was discouraged and conversation prioritised.

Something I hadn’t considered was the amount of social inclusion that “Birmingham Gateway were intending to deliver. Partnerships with orgs such as Joseph Rowntree Foundation were the headlines but again underscored with clear targets and KPI’s. There had been a lot of thought in to this process. For example bricklayers to be sourced locally but not the same guidance of staff to work on lifts and escalators.

The takeaway for me was Tim’s real commitment to the “hearts and minds” – he spoke of young people from tough estates having their horizons and opportunities broadened by Birmingham Gateway and it was quite obvious that he considered that to be just as important as the buildings created.

Then it was Peter’s turn. I feel sorry for him, he has to acknowledge concepts such as The Fourth Industrial Age, Gen Y, Gen Z and digital natives without getting derision and comments about HR Bingo Cards so I was pleased to hear him talk confidently about #FOBO – fear of becoming obsolete. He talked about 15 million jobs to be replaced by robots, 65% of children will end up doing jobs not invented yet and the Top 10 in demand jobs in 2010 didn’t exist in 2004.

He approached the issues around the gig economy (for example Uber) head on and was open about the productivity standstill and the huge regional inequalities. He was clear about the need to confront trends such as wage decline and job insecurity and how HR should be helping to create better businesses. It was good to hear about requirements for increased flexibility and to really understand that we must rethink the workforce relationship and confront the machine / scientific approaches to management.

There was a lot about empowerment, meaning, purpose, recognition and trust. I do sometimes feel that HR sits too comfortably in the white collar world so I was pleased that Peter acknowledged that relatively low wage roles also need / can have such values led approaches taken. For too long these roles have been seen as drone employment and the good solid workers have been overlooked as we rush to manage the problem people.

As he finished we got in to the wellbeing agenda and the impact of line managers on the health of employees. Peter challenged us to look at whether our practices are fit for purpose and to adapt our approaches about developing people / building capability. Finally I was relieved to see a slide saying “From ‘best’ practices to ‘best fit’ practices” and acknowledging that a lot of the policy and procedures that have been created are stifling and show distrust for our colleagues. He stressed the need for a confidence to challenge our organisations to look at things differently but also challenge ourselves.

In conclusion I liked the movement towards trusting staff but from experience that needs to be tempered by the reality of workplaces. If we actually spent as much time and effort managing the good staff as we do our “problem children” then we would be a whole lot better off. My challenge – I’ve heard Peter give variations on this talk for over two years but I’m not seeing much change. What will it take to get beyond the jargon and the HR bingo card? I hope that the rest of the day answers this.

Note: I finished this post before the Q&A – can I direct you to the #CIPDMAP16 debate on Twitter.