This is the third in a series of short blogs from the CIPD Midlands Area Partnership event.

Having had the big headlines from our keynote speakers it’s now time to move in to smaller breakout sessions. I’ve chosen to hear from Joanne Werth and Peter Kay who work at Tarmac. I’m keen to understand more about their “Polarity Model” approach and they are fun and warm as they start their workshop.

Some quick stats, 6,900 people, 120 quarries, 100,00 acres of land, 25 trains – the list goes on, even marine wharves. They are clear that Tarmac is in an old fashioned industry but facing 21st century issues. Peter talks about “the future is already here, it’s just unevenly distributed” and that when getting from A to B he often doesn’t know where or what B is! Jo takes over the helm and talks of working for the same organisation for 20 years but how that has evolved from a national org to being a small constituent part of a huge global corporation and the associated growing pains (and redundancies inherent in combining businesses). Even to the point of buying a business they had divested several years previously and then being spun out themselves. It was dizzying and underlined the importance of good HR driving a good organisational culture and pioneering new working practices.

Once we had context we moved in to the polarity model and how we often need both ends of a continuum – for example, stability AND flexibility, not one or the other. This took the form of an exercise in groups with the map below – Strategic vs “Business as usual” HR and how that works for Tarmac. There were some quick insights around the risks of stagnation and conversely over innovating. One insight I found useful was local HR giving great insights to more strategic teams, for example in terms of national sensibilities being represented / respected within the global parent company. Also that in acquisition often the parent company wants to get rid of existing local HR / L&D as indicative of an “old” way of working. It was a useful exercise to consider Organisational Development changes and their impact from quite polarised standpoints. Often organisations seek consensus and get lost in endless meetings, Tarmac are obviously keen to hear loud voices and spirited defenders of positions – a refreshing change. 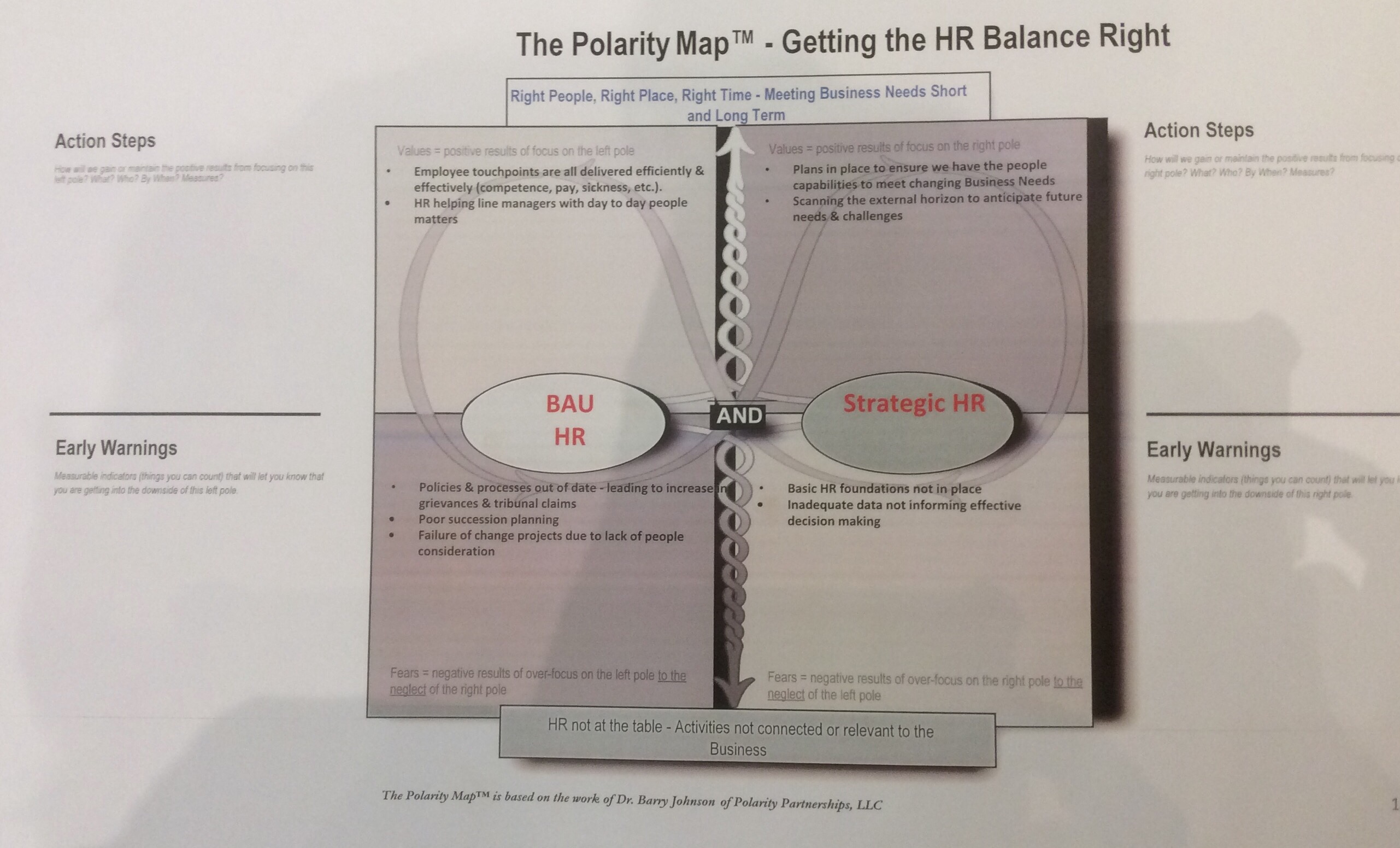 As the debate matured there was discussion about how much “newness” an organisation needs / can tolerate. It’s all very well offering staff development but how do we make space in their day job? After all the work doesn’t go away and dealing with such polarities is esssential.

The final point was around “Grit”- which wasn’t about the aggregates that Tarmac supply but rather the work of Angela Duckworth. Tarmac has been using this in their Graduate scheme and are considering rolling it out across the business. Perhaps summed up by the quote “Grit is living life like it’s a marathon not a sprint”.

Overall it was an interesting session and really highlighted that even in huge industrial combines getting the people stuff right is key.